UnReal is a new mountain biking film produced by two influential players Teton Gravity Research & Anthill Films.  They released an official trailer and in their own words, “let your friends at Teton Gravity Research & Anthill Films transport you to a place beyond the real world. Rise into the unReal and explore the imagination of some of the best mountain bikers on the planet, creating a world where snow is fair game, 1000-pound mammals are riding partners, and anything is possible.”

Regarding their partnership with Anthill Films for the project, Steve Jones TGR co-founder commented, “This collaboration with Anthill is an opportunity for us to bring our collective experience to a project that enables each of us to accomplish things, creatively and athletically, which we wouldn’t be able to on our own.” 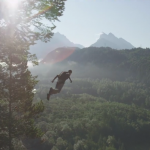